Those lucky enough to be born in December have three birthstones to choose from, all of them blue: Turquoise, zircon and tanzanite.

The original birthstone for December, turquoise has been revered by many ancient cultures around the world, including the Aztecs, ancient Egyptians, Persians and Mesopotamians. Turquoise entered Europe in the 13th century having travelled from the east along the Silk Road, through Turkey, and possibly gaining its name as the Turkish stone.

The oldest known turquoise mines are located on the Sinai peninsula and it’s from here that the ancient Egyptians took much of the material they used. As you will know if you were able to attend Susan’s talk in November, the use of turquoise, lapis lazuli and carnelian were extremely popular and symbolic to the ancient Egyptian. Turquoise’s light blue colour symbolised fertility and vegetation, and was associated with the Goddess Hathor, goddess of joy and fertility. Turquoise was used as inlay, beads and amulets carved into scaraboid with intaglios to the bottom, many of which were collected by British gentlemen doing a slightly more adventurous Grand Tour, and then again when Egyptomania hit in the Deco period.

The Persians also prized turquoise, calling it ‘firunza’ meaning victory and believing it to be a very powerful protective amulet that even warded off the evil eye. They used it very widely in the ceiling of Mosques where its sky blue colour represented heaven. They also wore it as turban ornaments and decorated bridles with it as another of its perceived attributes is to be good for horses, keeping them from stumbling on rocky ground and preventing colic. This latter belief spread to 17th century England where it was set in horses’ tack.

In the Americas the Aztecs used inlaid turquoise to decorate some of their most sacred objects, creating beautiful masks and figurative objects most likely used by their priests in elaborate rituals.

The native Americans used turquoise decoratively as beads and their shaman believed it gave them the ability to communicate with the spirit of the sky. Later, after contact with the Europeans, many tribes took to silver work and commonly used turquoise inlay. They still produce much sought-after silver jewellery today. North America is now one of the largest sources of turquoise, with imaginatively-named mines producing slightly different varieties. One of the best known, the Sleeping Beauty Mine, produced a pure, evenly-coloured sky blue turquoise which was marketed as extremely high quality, but is now closed. Many people still use the term ‘sleeping beauty turquoise’ for any turquoise with no veins in a pure sky blue colour, perhaps not realising it is actually a brand name for a particular locality.

Turquoise has been popular ever since it arrived in England but was particularly in vogue during the Georgian and Victorian periods, when it was used in sentimental jewellery because of its resemblance in colour to forget-me-nots. It was incorporated in jewellery meant for friends, family and lovers in mourning jewellery but also as gifts of love and affection.

Later, as Egyptomania swept the western world with the excavation of Tutankhamun’s tomb, turquoise – along with lapis and carnelian – was all the rage again. 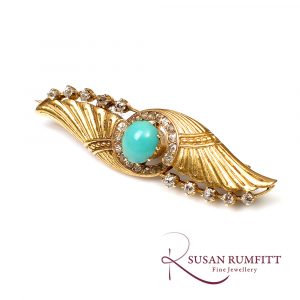 Take a look at this lovely Art Deco brooch above here or click here to browse our full collection of turquoise jewellery.

Not to be confused with cubic zirconium which is a man-made gemstone, zircon is a natural stone formed deep in the crust of the earth. It is colourless in its pure form but can be found in a range of colours including blues, reds, yellows and greens. Zircons contain a small amount of uranium which over large periods of time gradually breaks down the crystal structure and darkens the colour, often to a murky brownish-green. These stones are called metamict zircons and can be up to 4.4 billion years old.

Young zircons, often called high zircons, have a bright lustre and high dispersion that makes colourless zircon an effective substitute for diamond, although they are brittle and with time often show wear to the facet edges.

Blue zircons are the rarest form of zircon and were popularly during the Victorian period when they were often attractively set with a halo of diamonds. It is the blue variety of zircon which was added as a December birthstone. 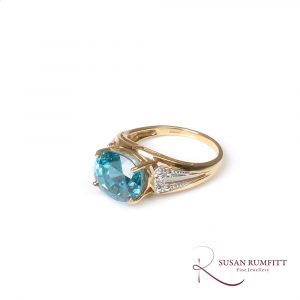 The gorgeous ring above can be viewed here or click here to browse our full collection of zircon jewellery.

The newest addition to the December birthstone list, tanzanite was first discovered in 1967 in Tanzania. It’s the violet blue form of zoisite which also occurs in pinks and greens, as well as an unattractive reddish brown. The first tanzanite found was mined close to the surface and was the beautiful violet blue that we know today. Not known in any other location, it was often sold as a wearable investment due to speculation that when this one source was exhausted, the price of this attractive gem would increase. In fact, violet blue tanzanite is produced by heating the reddish brown material and it’s thought that the first tanzanite mined had been heated whilst in the ground by a wildfire. 55 years after tanzanite’s discovery there is no sign of the production decreasing, so I think we can assume more new tanzanite will come to the market for some time to come.

The characteristic violet blue colour is due to the fact that tanzanite is strongly trichroic meaning that from different angles the stone displays different colour: blue, violet and a greenish yellow, which in practice is rarely seen.

Originally correctly named blue zoisite, Tiffany renamed the gem tanzanite when they showcased it only a year after its discovery. They used the slogan “Tanzanite can now be found in significant quantities in only two places in the world. In Tanzania. And Tiffany’s.”

Since then, it has been enthusiastically embraced by designers and consumers alike. Some notable examples include ‘The Heart of the Ocean’ from the film Titanic which is supposed to be a blue diamond but is actually tanzanite. ‘The Queen of Kilimanjaro’ tiara in Michael Scott’s (of apple fame) collection whose central tanzanite weighs a huge 242 carats in a serpentine mount set with tsavorite garnets and diamonds. Bigger still is the 423 carat tanzanite in the necklace designed by Kat Florence and modelled by Sarah Jessica Parker, which sold in a charity auction for over $300,000.