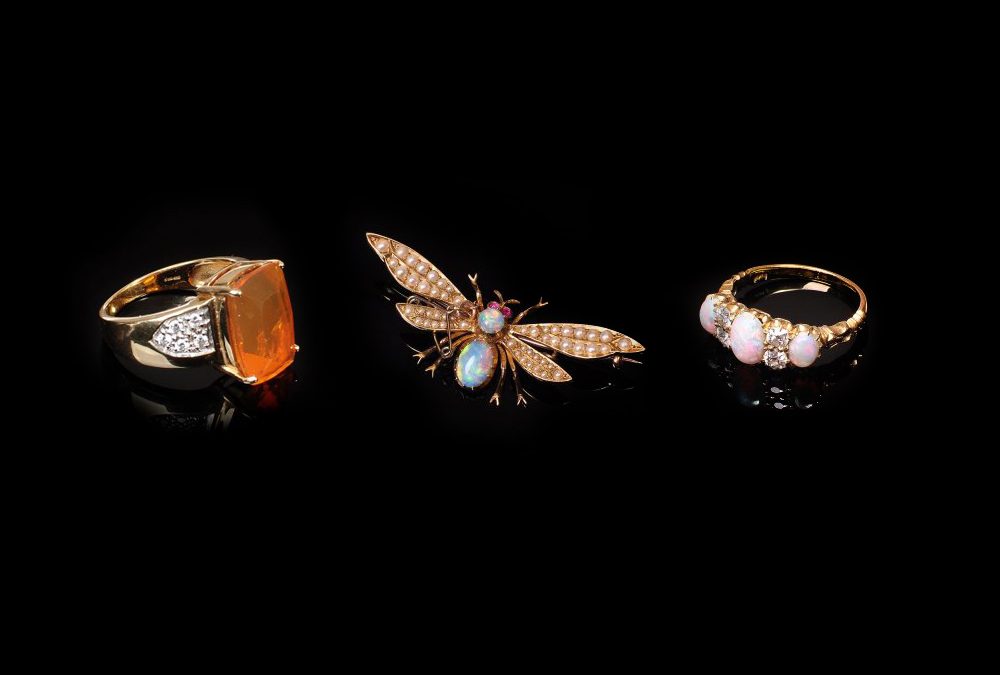 Opal is the October birthstone and is the focus of the next article in our series looking at birthstones for each month.

Opals have a long history and at various times have been considered to bring both good and bad luck. From making a person invisible to having healing powers particularly for the eye, opal has had many beliefs attached to it over the centuries. It has been a symbol of fidelity, hope, confidence and spontaneity, and is said to enhance creativity, encourage positive emotions and even ease childbirth.

As opal is the birthstone for October, it includes the Zodiac signs Libra and Scorpio. It is associated with love and passion as well as loyalty and faithfulness, and is given as a gift to celebrate 14th wedding anniversaries.

There are two main types of opal: Common opal, and precious opal. Common opals are opaque to translucent gems in a wide variety of pretty pastel shades.

The earliest known mining of opals occurred at around 400BC in the Carpathian Mountains in present day Slovakia, and this remained the main source of precious opal for many, many centuries. The mercurial flashes of so many colours led opals to be associated with a variety of myths. Bedouins thought them to be ‘thunderstones’ falling to earth in storms and trapping the lightning as they fell, whilst the Greeks thought them to be endowed with the gift of prophecy, and Plato wrote of its powers to turn a person invisible. Pliny the elder places them above all other gems: “For in them you shall see the living fire of ruby, the glorious purple of amethyst, the sea-green of the emerald, all glittering together in an incredible mixture of light.” Incredibly rare and associated with love, hope, and purity, they became a preferred gift of emperors to their wives and led to Senator Nonius fleeing to exile rather than sell his glorious opal to Mark Anthony to give to Cleopatra.

Napoleon, leaning on this classical tradition, gave Empress Josephine a 700ct black opal set in a tiara. Called “The Burning of Troy” for its predominantly red play of colour, this magnificent stone has since been lost to history.

During the dark ages opal’s popularity takes a dip, by then associated with thieves for its supposed ability to cloud the sight of others. As plague sweeps across Europe instilling fear and superstition in the populous, it’s noted that opals become brighter on a person stricken with fever. This creates the erroneous belief that the opal is the cause of the fever. However, by the 1500s when Queen Elizabeth I gives a jewel with a carved ruby and eight opals to Sir Francis Drake, and bright fire opals trickle in from the New World, opals are the height of fashion again.

It was Sir Walter Scott who unwittingly did the most harm to opal’s reputation with his gothic novel Anne of Geierstein. He uses opals shifting colours to dramatic effect, giving them the mystical quality of reacting to the wearer’s emotions. In his novel, shortly after the gem is accidentally splashed with holy water, it dulls and the main character Lady Hermione dies! Unbelievably, this fictional story led to a decline in the popularity of opals in Europe during the mid-1800s as people associated them with bad luck.

In addition, the difficulty in setting opals meant that many jewellers preferred not to use them, fearing the process would crack and ruin the precious stone.

Fortunately, Queen Victoria, who was given opals by her beloved Albert, continued to champion their cause, giving wedding gifts of exquisite opal jewellery to her five daughters. The discovery and mining of the vast opal fields in Australia combined with the high quality of the material found there, including black opals at Lightning Ridge, served only to increase the regard for opals during the Victorian period.

The incredible work of Wilhelm Schmidt also did much to revive their popularity. Working with this notoriously difficult medium he pioneered a technique of carving opals into beautiful cameos, supplying some of the most exclusive jewellers of the time, such as Child & Child, Giuliano and John Brogden, His work is still highly sought after and appears in many of the world’s museum collections. Opal’s relative availability alongside its ethereal beauty particularly recommended it to designers of the Arts and Craft and Art Nouveau movements. Being as reliant on an ethos as much as an aesthetic, these movements allowed opals to transcended traditional fine jewellery and feature heavily in the jewellery of the Avant Garde and literati.

At our gallery we have a gorgeous and ever changing selection of opal jewellery, including these lovely pieces below: 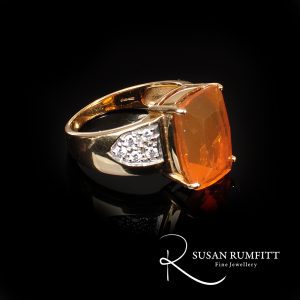 Pictured from left are:

Click here to browse our full collection of opal jewellery or book an appointment for a private viewing of the Gallery Collection.